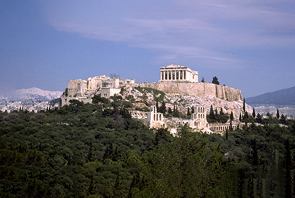 The Acropolis of Athens and its monuments are universal symbols of the classical spirit and civilization and form the greatest architectural and artistic complex bequeathed by Greek Antiquity to the world. In the second half of the 5th century BC, Athens, following the victory against the Persians and the establishment of democracy, took a leading position amongst the other city-states of the ancient world. In the age that followed, as thought and art flourished, an exceptional group of artists put into effect the ambitious plans of Athenian statesman Pericles and, under the inspired guidance of the sculptor Pheidias, transformed the rocky hill into a unique monument of thought and the arts. The most important monuments were built during that time: the Parthenon, built by Ictinus, the Erechtheon, the Propylaea, the monumental entrance to the Acropolis, designed by Mnesicles and the small temple Athena Nike. 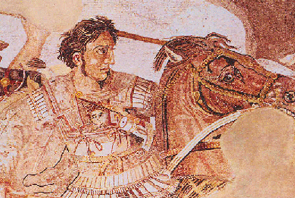 The city of Aigai, the ancient first capital of the Kingdom of Macedonia, was discovered in the 19th century near Vergina, in northern Greece. The most important remains are the monumental palace, lavishly decorated with mosaics and painted stuccoes, and the burial ground with more than 300 tumuli, some of which date from the 11th century B.C. One of the royal tombs in the Great Tumulus is identified as that of Philip II, who conquered all the Greek cities, paving the way for his son Alexander and the expansion of the Hellenistic world.

•  Prefecture of Imathia, Region of Central Macedonia
•  Date of Inscription: 1996 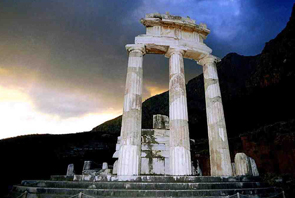 Archaeological Site of Delphi
The pan-Hellenic sanctuary of Delphi, where the oracle of Apollo spoke, was the site of the omphalos, the ‘navel of the world’. Blending harmoniously with the superb landscape and charged with sacred meaning, Delphi in the 6th century B.C. was indeed the religious centre and symbol of unity of the ancient Greek world.

•  Prefecture of Phokis, Region of Central Greece
•  Date of Inscription: 1987 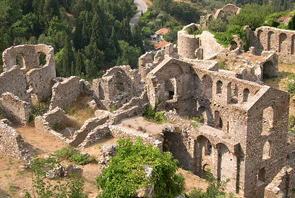 Mystras, the ‘wonder of the Morea’, was built as an amphitheatre around the fortress erected in 1249 by the prince of Achaia, William of Villehardouin. Reconquered by the Byzantines, then occupied by the Turks and the Venetians, the city was abandoned in 1832, leaving only the breathtaking medieval ruins, standing in a beautiful landscape

•  Prefecture of Laconia, Region of the Peloponnesos
•  Date of Inscription: 1989 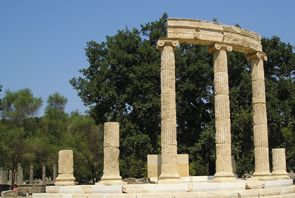 The site of Olympia, in a valley in the Peloponnesus, has been inhabited since prehistoric times. In the 10th century B.C., Olympia became a centre for the worship of Zeus. The Altis – the sanctuary to the gods – has one of the highest concentrations of masterpieces from the ancient Greek world. In addition to temples, there are the remains of all the sports structures erected for the Olympic Games, which were held in Olympia every four years beginning in 776 B.C.

•  Prefecture of Ilia, Region of West Greece in the Western Peloponnese
•  Date of Inscription: 1989

Archaeological Sites of Mycenae and Tiryns 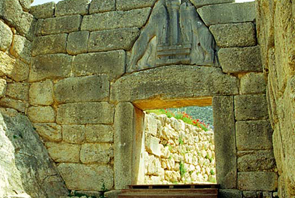 Archaeological Sites of Mycenae and Tiryns

The archaeological sites of Mycenae and Tiryns are the imposing ruins of the two greatest cities of the Mycenaean civilization, which dominated the eastern Mediterranean world from the 15th to the 12th century B.C. and played a vital role in the development of classical Greek culture. These two cities are indissolubly linked to the Homeric epics, the Iliad and the Odyssey , which have influenced European art and literature for more than three millennia.

•  Prefecture of Argolis, Region of the Peloponnesos
•  Date of Inscription: 1999 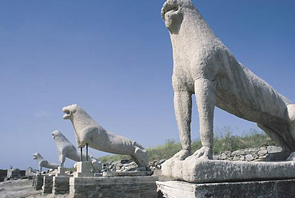 According to Greek mythology, Apollo was born on this tiny island in the Cyclades archipelago. Apollo’s sanctuary attracted pilgrims from all over Greece and Delos was a prosperous trading port. The island bears traces of the succeeding civilizations in the Aegean world, from the 3rd millennium B.C. to the palaeochristian era. The archaeological site is exceptionally extensive and rich and conveys the image of a great cosmopolitan Mediterranean port.

•  Prefecture of Cyclades, Region of the South Aegean
•  Date of Inscription: 1990

Historic Centre (Chorá) with the Monastery of Saint John 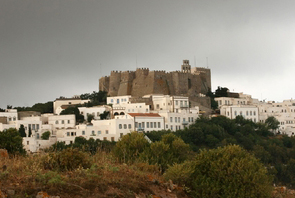 Historic Centre (Chorá) with the Monastery of Saint John

The small island of Pátmos in the Dodecanese is reputed to be where St John the Theologian wrote both his Gospel and the Apocalypse. A monastery dedicated to the ‘beloved disciple’ was founded there in the late 10th century and it has been a place of pilgrimage and Greek Orthodox learning ever since. The fine monastic complex dominates the island. The old settlement of Chorá, associated with it, contains many religious and secular buildings.

•  Prefecture of Dodecanese, Region of the South Aegean
•  Date of Inscription: 1999 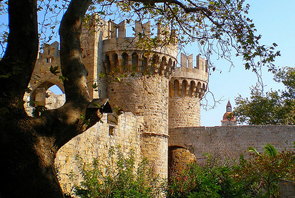 The Order of St John of Jerusalem occupied Rhodes from 1309 to 1523 and set about transforming the city into a stronghold. It subsequently came under Turkish and Italian rule. With the Palace of the Grand Masters, the Great Hospital and the Street of the Knights, the Upper Town is one of the most beautiful urban ensembles of the Gothic period. In the Lower Town, Gothic architecture coexists with mosques, public baths and other buildings dating from the Ottoman period.

•  Prefecture of Dodecanese, Region of the South Aegean
•  Date of Inscription: 1988

Monasteries of Daphni, Hosios Loukas and Nea Moni of Chios 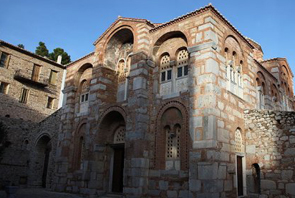 Monasteries of Daphni, Hosios Loukas and Nea Moni of Chios

Although geographically distant from each other, these three monasteries (the first is in Attica, near Athens, the second near Delphi, and the third on an island in the Aegean Sea) belong to the same typological series and share the same aesthetic characteristics. The churches are built on a cross-in-square plan with a large dome supported by squinches defining an octagonal space. In the 11th and 12th centuries they were decorated with superb marble works as well as mosaics on a gold background, all characteristic of the ‘second golden age of Byzantine art’. 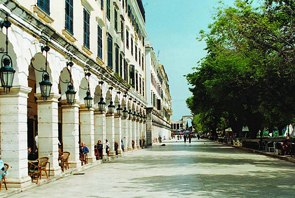 The Old Town of Corfu, on the Island of Corfu off the western coasts of Albania and Greece, is located in a strategic position at the entrance of the Adriatic Sea, and has its roots in the 8th century BC. The three forts of the town, designed by renowned Venetian engineers, were used for four centuries to defend the maritime trading interests of the Republic of Venice against the Ottoman Empire. In the course of time, the forts were repaired and partly rebuilt several times, more recently under British rule in the 19th century. The mainly neoclassical housing stock of the Old Town is partly from the Venetian period, partly of later construction, notably the 19th century. As a fortified Mediterranean port, Corfu’s urban and port ensemble is notable for its high level of integrity and authenticity.

Paleochristian and Byzantine Monuments of Thessalonika 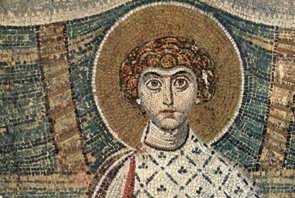 Paleochristian and Byzantine Monuments of Thessalonika

Founded in 315 B.C., the provincial capital and sea port of Thessalonika was one of the first bases for the spread of Christianity. Among its Christian monuments are fine churches, some built on the Greek cross plan and others on the three-nave basilica plan. Constructed over a long period, from the 4th to the 15th century, they constitute a diachronic typological series, which had considerable influence in the Byzantine world. The mosaics of the rotunda, St Demetrius and St David are among the great masterpieces of early Christian art.

•  Prefecture of Thessaloniki, Region of Central Macedonia
•  Date of Inscription: 1988

Pythagoreion and Heraion of Samos 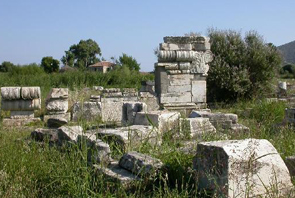 Pythagoreion and Heraion of Samos

Many civilizations have inhabited this small Aegean island, near Asia Minor, since the 3rd millennium B.C. The remains of Pythagoreion, an ancient fortified port with Greek and Roman monuments and a spectacular tunnel-aqueduct, as well as the Heraion, temple of the Samian Hera, can still be seen.

•  Prefecture of Samos, Region of the North Aegean
•  Date of Inscription: 1992

Sanctuary of Asklepios at Epidaurus 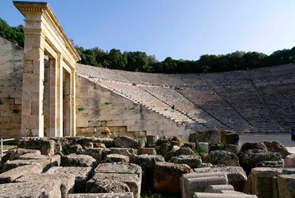 Sanctuary of Asklepios at Epidaurus

In a small valley in the Peloponnesus, the shrine of Asklepios, the god of medicine, developed out of a much earlier cult of Apollo (Maleatas), during the 6th century BC at the latest, as the official cult of the city state of Epidaurus. Its principal monuments, particularly the temple of Asklepios, the Tholos and the Theatre – considered one of the purest masterpieces of Greek architecture – date from the 4th century. The vast site, with its temples and hospital buildings devoted to its healing gods, provides valuable insight into the healing cults of Greek and Roman times.

•  Prefecture of Argolis, Region of the Peloponnesos
•  Date of Inscription: 1988

Temple of Apollo Epicurius at Bassae 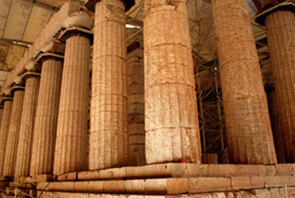 Temple of Apollo Epicurius at Bassae

This famous temple to the god of healing and the sun was built towards the middle of the 5th century B.C. in the lonely heights of the Arcadian mountains. The temple, which has the oldest Corinthian capital yet found, combines the Archaic style and the serenity of the Doric style with some daring architectural features.

•  Prefectures of Messenia, Arcadia, and Ilia in the Western Peloponnese
•  Date of Inscription: 1986 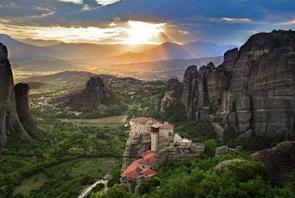 In a region of almost inaccessible sandstone peaks, monks settled on these ‘columns of the sky’ from the 11th century onwards. Twenty-four of these monasteries were built, despite incredible difficulties, at the time of the great revival of the eremetic ideal in the 15th century. Their 16th-century frescoes mark a key stage in the development of post-Byzantine painting.

•  Prefecture of Trikala, Region of Thessaly
•  Date of Inscription: 1988 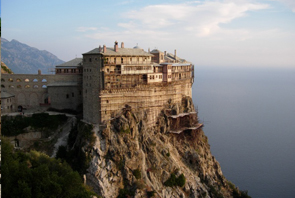 An Orthodox spiritual centre since 1054, Mount Athos has enjoyed an autonomous statute since Byzantine times. The ‘Holy Mountain’, which is forbidden to women and children, is also a recognized artistic site. The layout of the monasteries (about 20 of which are presently inhabited by some 1,400 monks) had an influence as far afield as Russia, and its school of painting influenced the history of Orthodox art.